Hello, gentle readers-
As you may have noticed, I posted a review on my blog this week of another author’s work. This is the first time I have done that, and honestly I thought long and hard bout it, because I think it creates an ethical dilemma for writers.

I do not want my site to be a review site, but I like the mix of personal reflection, advice, and wanting to share things I am excited about with everyone. Those things may be movies ( I just watched the new Tarzan movie and I loved it, but the critics not so much), but also books.

Just so you know, gentle reader, I will not post a review unless I feel passionately about a book, or an author’s work. I will not guest host anyone that I don’t feel has something important or unique to add to the conversation. With that said, it is not my intention to blacken anyone’s work or reputation.

In the universal words of kindergarten teachers everywhere, “If I can’t say something nice, I won’t say anything at all.” So, gentle reader, if you see a review on my website, it will be positive, but rest assured there are plenty of items that I have rendered a polite pass on in my inbox.

Think about your own experiences, and how this might apply to you. Do you like to read sites that eviscerate the person/author/actor/chef, or are you like me and want just the positive?

And with that, I leave you with a pic of my poodle, who had an unfortunate grooming incident yesterday. What type of review would you leave on their site? Hmm? 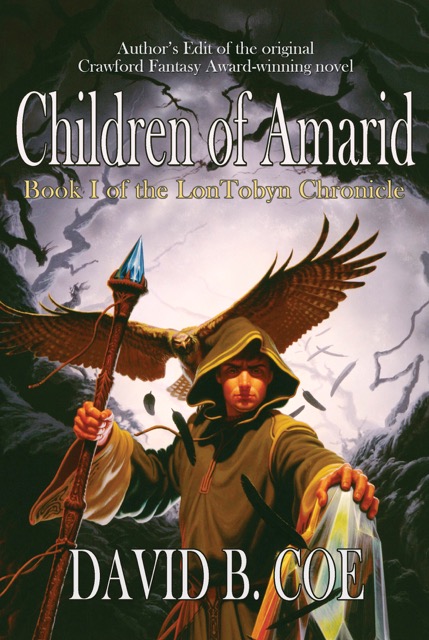 Twenty years ago marked the initial release of Children of Amarid, a smash hit of a début novel for author David B. Coe. This year marks the “author edits” re-release of the volume, which is what I want to talk about today.

You know the comfortable feeling and sense of homecoming a fresh cup of coffee provides the senses? That is the feeling I had when I read Children of Amarid.The plot is a refreshingly upbeat take on the usual epic fantasy fare.

It’s old-school epic fantasy at its best- epic quests entwined with a coming-of-age novel set in familiar fantasy territory. What I loved about this novel was its sense of realistic optimism; if the characters  did not succeed, the world would change, but they would adapt. Their fear was real. The characters are engaging and personable, so well-drawn that you believe every plot twist. That is a strength of Coe’s writing, and it is wonderful to settle back in a comfy chair and let a master take you on a journey.

The characters- here is Coe’s secret super-power. His characters are generously developed, full-figured entities that glide through the conflict on the page in a very organic flow. No jarring “WTF?” moments from these characters to jolt you out of the story and back into reality.

The world building in nice- again, very routine for epic fantasy in the sense of a “good” and “bad” world. One land is ruled by science and technology and the other is complemented by magic. My sense is both need each other in the coming sequels – The Outlanders release is slated for later this year- to defeat the common enemy, which is a nice change from the “total annihilation/domination” themes that persist in more contemporary works.

My only drawback personally was the relationship between the main character and his eventual romantic interest- it seemed a bit plain and less believable when compared to the complexities of other emotional moments in the novel. Full disclosure, I am a recovering romance reader, so my expectations for this relationship may be very different that the regular fantasy reader.

So if you are interested, I’ve posted a few links to the novel, as well as the usual suspects for purchase. I hope this review has been helpful!

Until next time-
Lillian

Children of Amarid, by David B. Coe

I give it 4.5  out of 5 stars, the only ding for the relationship between the main character and his girl.

About CHILDREN OF AMARID:
CHILDREN OF AMARID is the first volume of the LonTobyn Chronicle, David B. Coe’s Crawford Award-winning debut series. This is the Author’s Edit of the original book.
For a millennium  the Children of Amarid have served the people of Tobyn-Ser. Drawing upon the Mage-Craft, which flows from the psychic bond they forge with their avian familiars, the Mages of the Order have fulfilled their oaths by healing the injured and ill, repelling invasions by the land’s enemies, and caring for the people in times of crisis. They are governed by laws handed down by Amarid, the first of their kind, who committed the Mage-Craft to the people’s protection. Only once in a thousand years has a mage defied those laws. Theron, a contemporary of Amarid, sought to use his powers to gain wealth and glory. For that he was punished, though not before he brought down a terrible curse on his fellow mages and all who would come after them.
CHILDREN OF AMARID (The LonTobyn Chronicle, Book 1) | David B. Coe | Lore Seekers Press | $4.99 eBook/ $18.95 Paperback | 384 pages | June 22, 2016 | ISBN: 978-1622680498 | Goodreads link: https://www.goodreads.com/book/show/355078.Children_of_Amarid?from_search=true
Purchase links
Amazon: https://www.amazon.com/Children-Amarid-David-B-Coe/dp/1622680499
Barnes & Noble: http://www.barnesandnoble.com/w/children-of-amarid-david-b-coe/1100357918?ean=9781622680498
Books-A-Million: http://www.booksamillion.com/p/Children-Amarid/David-B-Coe/9781622680498?id=6681036309630
About David B. Coe:
David B. Coe, who also writes as D.B. Jackson, is the award-winning author of nineteen novels and more than a dozen short stories.
Writing under his own name (http://www.DavidBCoe.com) he has most recently completed a contemporary urban fantasy called the Case Files of Justis Fearsson, published by Baen Books. The first two books,SPELL BLIND and HIS FATHER’S EYES came out in 2015. The third volume, SHADOW’S BLADE, has recently been released.
Writing under the D.B. Jackson pen name (http://www.DBJackson-Author.com), he writes the Thieftaker Chronicles, a series set in pre-Revolutionary Boston that combines elements of urban fantasy, mystery, and historical fiction. All four books in the series, THIEFTAKER, THIEVES’ QUARRY, A PLUNDER OF SOULS, and DEAD MAN’S REACH, are available from Tor Books.
David is the author of the LonTobyn Chronicle, his debut trilogy, which received the Crawford Fantasy Award as the best work by a new author in fantasy. He has also written the critically acclaimed Winds of the Forelands quintet and Blood of the Southlands trilogy, and the novelization of director Ridley Scott’s movie, ROBIN HOOD, starring Russell Crowe. David’s books have been translated into a dozen languages.
He received his undergraduate degree from Brown University and his Master’s and Ph.D. in U.S. history from Stanford University.  He co-founded and regularly contributes to the Magical Words group blog (http://magicalwords.net), a site devoted to discussions of the craft and business of writing fantasy, and is co-author of How To Write Magical Words:  A Writer’s Companion.